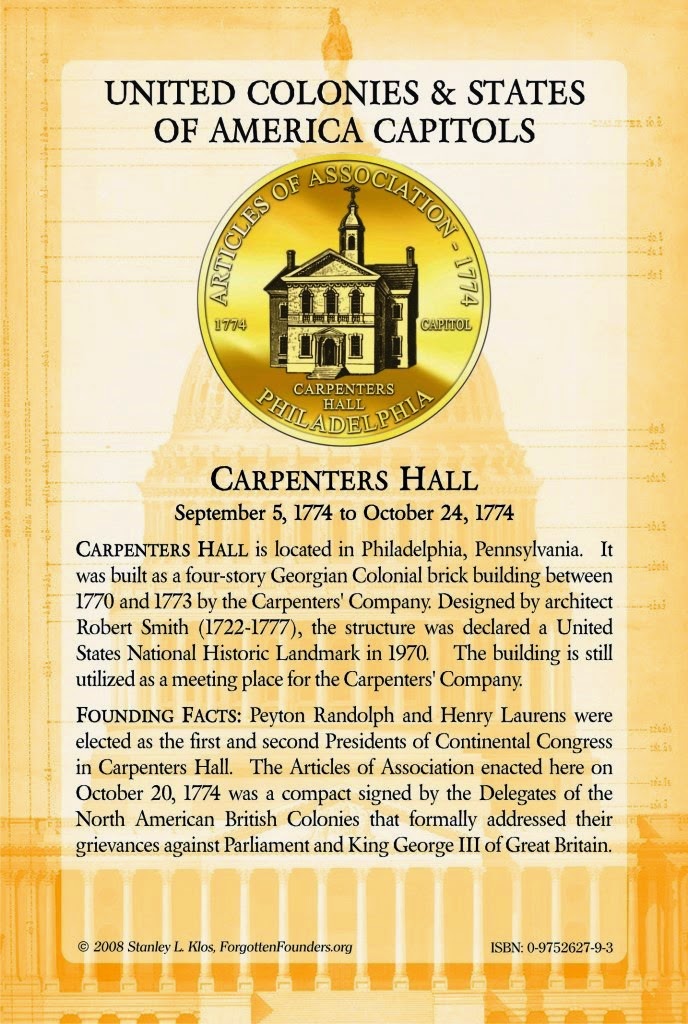 Carpenters’ Hall is located in Philadelphia, Pennsylvania.  It was built as a four-story Georgian Colonial brick building between 1770 and 1773 by the Carpenters’ Company. Designed by architect Robert Smith (1722-1777), the structure was declared a United States National Historic Landmark in 1970.   The building is still utilized as a meeting place for the Carpenters' Company.  It was in Carpenters’ Hall that the United Colonies Continental Congress first convened and founded the First United American Republic.


As decided at City Tavern on September 1st, 1774, deputies representing eleven colonies assembled at 10 am at the tavern.  According to Delegate James Duane:


The Members of the Congress met at Smith's [Sic City] Tavern. The Speaker of the Pensylvania Assembly having offerd the Congress the use of the State house; & the Carpenters the use of their Hall, It was agreed to take a View of each. We proceeded to the Carpenter's hall. Mr .Lynch proposed the Question whether as that was in all respects Suitable it ought not to be fixed upon without further Enquiry.

I observed that if the State house was equally convenient it ought to be preferred being a provincial & the Carpenter's Hall[1] a private House. And besides as it was tenderd by the Speaker it seemed to be a piece of respect which was due to him, at least to enquire whether the State House was not equally convenient. The Question was however called for; & a great Majority fixed upon the Carpenters hall.[2]

John Adams wrote of the event in his diary:

Monday. At ten the delegates all met at the City Tavern, and walked to the Carpenters' Hall, where they took a view of the room, and of the chamber where is an excellent library; there is also a long entry where gentlemen may walk, and a convenient chamber opposite to the library. The general cry was, that this was a good room, and the question was put, whether we were satisfied with this room ? and it passed in the affirmative. A very few were for the negative, and they were chiefly from Pennsylvania and New York. [3]

The deputies who formed the Colonial Congress were not men who enjoyed a national reputation. The colonial population was now surpassing two million inhabitants with no continental newspaper or magazine.  Consequently, they were nearly all strangers to each other with most never even hearing the names of their new colleagues.  There were, however, several exceptions.

John and Samuel Adams were the Boston leaders identified with radical opposition to Great Britain and known all over the colonies. Militia Colonel George Washington of Virginia had achieved colonial fame by his service with British regulars during the French and Indian War. Peyton Randolph was known as the judicious Speaker of the Virginia House of Burgesses and the attorney general who struck down Governor Dinwiddie’s Pistole land tax in a hearing before the British Lords of Trade.[4]  Patrick Henry was known as an eloquent orator from his memorable opposition to the Stamp Act in 1765. There were other delegates, who were men of some known influence in their own colonies, but the new colonial council had little knowledge of their ethos. It was a new beginning.


Students and Teachers of US History this is a video of Stanley and Christopher Klos presenting America's Four United Republics Curriculum at the University of Pennsylvania's Wharton School. The December 2015 video was an impromptu capture by a member of the audience of Penn students, professors and guests that numbered about 200. - Click Here for more information

The first order of business for the delegates after the presentation of credentials was the election of a presiding officer. Delegate James Duane writes in his notes on the debates:


The Names of the Members were then called over; After which Mr Lynch proposed that we shoud elect a President or Chairman and named Mr Peyton Randolph Speaker of the Assembly of Virginia, who was unanimously approvd & placed in the Chair. A Question was then put what Title the Convention should assume & it was agred that it should be called the Congress. Another Question was put what shoud be the Stile of Mr Randolph & it was agreed that he should be called the President.[2]

Congress next considered the election of a Secretary and Delegate Lynch put forth the name of Charles Thompson.

Charles Thomson an orphan at 10 established himself through hard work as a Philadelphia merchant and intellectual in the 1750’s. He became embroiled in colonial politics 1760’s aligning himself with the more liberal colonists into the 1770’s which was quite unusual for a businessman. His conservative peers campaigned hard against his election as a delegate from Pennsylvania to the Continental Congress and were successful.  His benefactor, Benjamin Franklin, was a strong supporter for his congressional appointment and despite being then known as the “Samuel Adams of Philadelphia” Thomson was elected unanimously to be the Secretary of the Continental Congress.   Duane writes:

The next point was to fix on a Clerk or Secretary. Mr Thompson was proposd by Mr Lynch.Mr. Jay observed that he had Authority to say that one of the members of the Congress was willing to accept the Office & he conceivd the preference was due to him [him being James Duane]. To which it was answerd that such an appointment woud deprive the Congress of a Member as he woud be too much incumberd by the Duties of a Clerk to attend to the Trust for which he was chosen. The Objection being thought Reasonable Mr Thompson was appointed by the Stile of Secretary of the Congress.[2]

Thompson would serve in this position in both the Colonial & U.S. Continental Congress and the United States in Congress Assembled for nearly 15 years.

By his polical connections, his long tenure of office, and his executiove and legislative functions, Thomson influenced the course of congressional and Revolutionary affairs.  “Secretary” was the title given to British to their executive department heads and Thomson was Secretary in that sense and not in sense of a record keeper or file clerk.

President Peyton Randolph, like many of the founders, was a deeply religious man. Strong Christian convictions were commonplace in the Continental Congress Assembly. In fact Charles Thomson in his later years of life would forgo publishing a 15 year account of Congress instead choosing to provide the first American translation of the Greek Septuagint into English.

The practice of prayer before conducting business initiated by Peyton Randolph and the First Continental Congress still remains an inte­gral part of the Supreme Court, U.S. Senate and House of Representatives opening session rituals in 2008.  In 1774 the Continental Congress invited the Reverend Jacob Duché rector of Christ Church, to open their sessions with prayer.
The Journals of Congress report on September 7, 1774:

Agreeable to the resolve of yesterday, the meeting was opened with prayers by the Revd. Mr. Duché. Voted, That the thanks of the Congress be given to Mr. Duché, by Mr. Cushing and Mr. Ward, for performing divine Service, and for the excellent prayer, which he composed and deliver'd on the occasion.

Peyton Randolph's Congress first consideration to address was the colonies’ grievances with Great Britain.  The first measure was introduced by Pennsylvania Delegate, Joseph Galloway. His "Plan of Union" urged the creation of a Colonial Parliament that would act in concert with the existing British body. On matters relating to America, each was to have veto power over the other's actions.

[1] Carpenters' Hall is located in the Center City neighborhood of Philadelphia.  The two-story red brick building was completed in 1773 and set back off Chestnut Street with the address of 320.  The building is on the National Register of Historic Places and part of Independence National Historical Park.
[2] James Duane's Notes of Debates, Philadelphia Monday 5 September 1774
[3] Adams, John and Charles Francis Adams, The Works of John Adams, Second President of the United States, Boston: Little, Brown, and Company,1865,  p 365
[4] Fitzpatrick, John C., Editor, The Writings of George Washington from the Original Manuscript Sources, 1745-1799; Governor Robert Dinwiddie letter to Peyton Randolph dated October 23, 1754.

On September 5, 1774 Congress convenes and elects Peyton Randolph as President and Charles Thomson as its Secretary. On September 17 Congress endorses the Suffolk Resolves from Massachusetts and on September 27th they adopt a nonimportation agreement to begin December 1, 1774. On September 28th Congress defeats Joseph Galloway's plan of union ordering it to lie on the table. On September 30 Congress resolves to halt exports to Great Britain, Ireland, and the West Indies effective September 10, 1775. On October 14 Congress adopts a declaration of grievances and rights and on the 18 they approve the Articles of Association naming themselves the Continental Congress. On October 21 they approve an address to the people of Great Britain and one to the inhabitants of the colonies.

October 22 Congress agrees to reconvene on May 10, 1775, "unless the redress of grievances, which we have desired, be obtained before that time" and elect Henry Middleton as second president of the Continental Congress. On October 26 Congress approves an address to the king and letters to Quebec, Saint John's Island (now Prince Edward Island), Nova Scotia, Georgia, East Florida, and West Florida to join the Congress and then they dissolve itself.

Capitals of the United States and Colonies of America

*** President of the Confederate States of America