Prospect House
Princeton, New Jersey
Not a Seat of Government 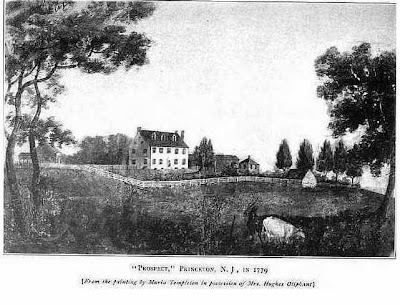 Several historians maintain that the USCA first convened at Colonel George Morgan’s House, named Prospect, when they first assembled in Princeton.  I was unable to find any record of their assembly in the 1784 USCA Journals, delegate letters, period newspapers and magazines at Morgan’s house at Princeton University, Varnum Collins, however, makes a compelling case that the USCA did assemble at Prospect:

The evidence favoring the view that “Prospect” was the scene of the opening meetings is more compelling in its strength. Congress had come to Princeton hastily and apparently without making any effort to ascertain definitely the practical accommodations of the village. Mr. Boudinot may have had Nassau Hall in his mind as a meeting place at the outset; but when Colonel Morgan, who was well acquainted in Congress, stated in his letter of the 25th that one of his buildings contained “a better room for them to meet in” than the members could be “immediately accommodated with elsewhere.” Mr. Boudinot probably accepted the offer as at least a temporary arrangement.

Furthermore in the list of available accommodations issued in October by the citizens of Princeton, Colonel Morgan announces his willingness to have “the Congress Room” in his house fitted up for winter use if desired. It is difficult to explain this designation of any room at “Prospect” unless a previous occupation of it by Congress had given it a right to that title. Finally it is noted in a memorandum book of Charles Thomson, Secretary of Congress, that the sheet of paper bearing the record of the distribution of ten sets of the Journal was lost “in removing the Office from the House of Col. Morgan to the College.” Unfortunately, this record is dated merely “1783;” but when half of the rooms in Nassau Hall were vacant it is altogether improbable, considering the close relation existing between the Secretary of Congress and that body itself, that he should have used Colonel Morgan's house as an office if Congress were sitting in Nassau Hall. It is easier to believe that he moved his belongings over to the college building because Congress was moving also.  We may, then, take it for granted that the first three meetings (June 30th, July 1st and 2d) were held in Colonel Morgan's house and that thereafter the sessions were held in the college building, in the library room presumably, except on state occasions, when they were held in the prayer-hall. The library-room which had been stripped by the British was on the north side of the second floor over the main entrance, and was about thirty by twenty-four feet in size.[1]

Prospect House owes its name to the stone farmhouse first constructed on the site in the mid-18th century by Colonel George Morgan, western explorer, U.S. Agent for Indian Affairs and gentleman farmer. The superb eastern view from that farmhouse prompted Colonel Morgan to name his estate "Prospect." Morgan’s estate, a popular stopping off place in Revolutionary times, was visited by such diverse groups as a delegation of Delaware Indians, 2,000 mutinous soldiers of the Pennsylvania Line and the Continental Congress. When Prospect was acquired in 1849 by John Potter, a wealthy merchant from Charleston, S.C., he replaced the colonial structure with the present mansion.[2]

A letter from USCA Secretary Charles Thomson to Hannah Thomson, June 30, 1783, indicates that this is incorrect.

Dear Hannah, By nine o clock, the evening I left you, I arrived at Bristol, where I met the Minister on his return.  ... Next day I started a little after three and was in the boat at Trenton ferry before Six. The ride thus far was exceedingly pleasant, the morning Serene, and the air cool and refreshing. At Trenton I shaved, washed & breakfasted ... As soon as I had breakfasted I set forward and travelling easy I arrived at Princeton about eleven. .... The town is small not much larger than Newark and the chief part of the houses small & built of wood. There are a number of genteel houses around & in the neighborhood. With respect to situation, convenience & pleasure I do not know a more agreeable spot in America. As soon as I had dressed I went to the College to meet Congress. I was conducted along an entry (which runs from one end to the other through the middle of the college) & was led up into the third story where a few members were assembled. Whether it was design or accident that led me this way, I know not. But it had the effect of raising my mortification & disgust at the Situation of Congress to the highest degree. For as I was led along the entry I passed by the chambers of the students, from whence in the sultry heat of the day issued warm steams from the beds, foul linen & dirty lodgings of the boys. I found the members extremely out of humour and dissatisfied with their situation. They are quartered upon the inhabitants who have put themselves to great inconveniencies to receive them into their houses & furnish them with lodgings, but who are not in a situation to board them. ...


Students and Teachers of US History this is a video of Stanley and Christopher Klos presenting America's Four United Republics Curriculum at the University of Pennsylvania's Wharton School. The December 2015 video was an impromptu capture by a member of the audience of Penn students, professors and guests that numbered about 200. - Click Here for more information


According to Letters of the Delegates Editor Paul H. Smith:


This statement by Thomson disproves Varnum L. Collins' [Collins, Congress at Princeton, pp. 55-59] hitherto plausible conjecture that Congress met at George Morgan's Prospect estate between June 30, when the delegates first officially gathered to transact business in Princeton, and July 2, when they accepted the College of New Jersey's offer to use Nassau Hall as a meeting place for Congress. As Collins pointed out, Col. Morgan offered Congress the use of Prospect on June 25 and later described one of the rooms in his home as the 'Congress Room,' but Thomson's testimony that on June 30 he went 'to the College to meet Congress' clearly demonstrates that the delegates were already convened in Nassau Hall and thus could not have met at Prospect on the dates Collins surmised. Perhaps certain members of Congress met informally at Prospect before the 30th, but it is certain they did not transact any public business there." This commentary is reprinted from Eugene R. Sheridan and John M. Murrin, eds., Congress at Princeton: Being the Letters of Charles Thomson to Hannah Thomson, June-October 1783 (Princeton: Princeton University Library, 1985), p. 5. This excellent work was issued to commemorate the bicentennial of Congress' interlude at Princeton, and was made possible by Princeton University's purchase of a collection of 33 letters from Thomson to Hannah that had remained in private hands until 1983. [3]

Prospect House has thus been dismissed as a building utilized to convene the United States in Congress Assembled.


Capitals of the United Colonies and States of America

*** President of the Confederate States of America